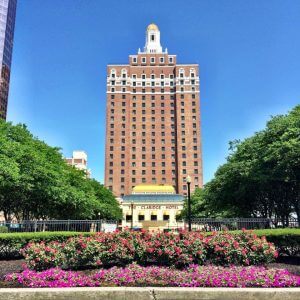 The Claridge Hotel in Atlantic City is reasonably unique amongst many hotels and resorts in the city in that it was purpose-built as a hotel, whereas many of the current accommodation venues have tended to be smaller boarding houses or hotels that grew and were added to, as the demand increased. The Claridge Hotel was the brain-child of a Philadelphia architect, John McShain. He designed the 24-story, 400-room hotel as a playground for the rich and famous. McShain would go on to create the Pentagon, the Kennedy Center, and the Roosevelt Library as well as renovate the White House. The Claridge Hotel opened in 1930, and due to the fact that it was the tallest building in the city was known as “The Skyscraper by the Sea”.

A Landmark Building with Famous Guests

Over the years, the Claridge Hotel has been part and parcel of American history. From housing the military forces during WWII to becoming one of the most elegant hotels in the country, many famous people have been guests at this iconic hotel. Marilyn Monroe stayed there during the fifties, and with its association with the casinos and its playground image, was frequented by Al Capone, Nucky Johnson and Frank Sinatra. Many highly respected international celebrities were also accommodated at the Claridge during its heyday, including Bob Hope and Princess Grace of Monaco amongst others.

Located at the famous intersection of Boardwalk and Park Place, the Claridge Hotel earned the market’s fourth gaming license. This was when property developer Del Webb owned the building, and the Claridge Hotel was at the forefront of the casino industry in Atlantic City and contributed in a substantial way to the entire gaming atmosphere of the city.

In more recent history, the Claridge Hotel was purchased by Park Place Entertainment in 2001. The demands and expectations of the area had undergone a complete change and the new owners realised that the casino industry was no longer attracting the quality of patronage that they felt was best for the hotel. The gaming side of the hotel, so much the primary attraction over the previous fifty years, was shut down completely in 2005.

In 2014, the Claridge Hotel was purchased by its current owners, TJM Atlantic City. With a dedicated aim of delivering a ‘New Claridge’ that preserves the history, class and charm that this landmark building boasts. As a hotel, however, the Claridge Hotel has added some fresh and exciting nongaming attractions for the guests to enjoy. TJM Atlantic City, LLC is a subsidiary of TJM Properties, Inc. a real estate investment firm. The company and its owner, Terence J McCarthy have some 50 years’ specialisation in hotel development.

The Claridge Atlantic City now parades a new restaurant amongst other upgraded entertainment facilities. The Claridge’s two-level casino space has been converted into a high-end art gallery that shows the work of dozens of artists, and a children’s museum.

Guests are responding favourably to the non-gaming amenities and hotel occupancy has been around 90% for several years. This has been boosted by the closures of competitive venues, including Trump Plaza, which has meant many less rooms available in Atlantic City.